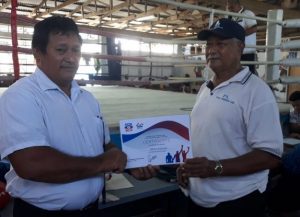 The President of the Samoa Boxing Federation Papalii Pasi Poloa gave prises and certificates to 11 winners of the 2020 «Best in Boxing» award. The trophy is dedicated to the International Boxing Day which is celebrated on July 22nd. The ceremony took place during the dual boxing competition of the top two boxing clubs in the country with 32 bouts in total.

The post Samoa Boxing Federation awarded «Best in Boxing» of the country appeared first on AIBA.