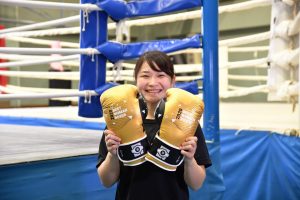 Japan Boxing Federation awarded «Best in Boxing» of the country. The prize was given not only for sporting achievements but also for social input. The award was dedicated to the International Boxing Day which is celebrated on July 22nd annually.

Sewon Okazawa was awarded as the Best Elite Man Boxer of the year. The quarter-finalist of the last edition of the AIBA Men World Boxing Championships cares not only about his own career. This summer he claimed he would take a break in his preparation for home Games to repair the boxing gym in Kanoya damaged by flooding after torrential rain. He is working with the gym’s head coach Shunya Aratake.

‘I want to give something back by helping return the gym to its usual condition’, he said in June to Kyodo News. 21-years-old Tsukimi Namiki became the Best Elite Woman Boxer. She is a quarter-finalist of the last edition of AIBA Women’s World Boxing Championships. She is the first woman ever from Japan qualified for the Games.

The Best Coach of the «Best in Boxing» awards, Yoshiyuki Hirano, for many years has participated in national team training camps and international tournaments.

Japan Boxing Federation has organized “High school shadowboxing Challenge 2020” for the students who are enthusiastic about boxing training at their respective high schools all over Japan. This event was awarded the Best innovative project of the year.

Owing to the impact of the new coronavirus, most of the boxing events for high school students have been canceled so far. As an alternative idea to support those students who are working hard on their training, Japan Boxing Federation planned the “High school Shadowboxing Challenge 2020”.

Video shooting the sense of their respective style of shadowboxing must be uploaded on social media and those videos will be judged by such the distinguished expert as Naoya Inoue, the WBA and IBF World Bantamweight Champion, and other top-leveled boxing experts.

All the winners’ of the Japan «Best in Boxing» prize are the following:

The post Aimed to save his gym after the flooding Sewon Okazawa won «Best in Boxing» prize  appeared first on AIBA.